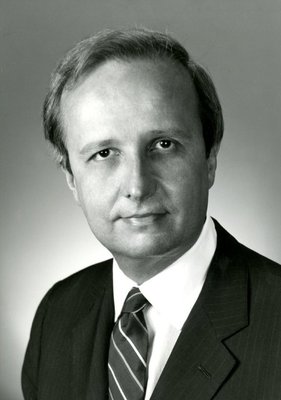 Morris Sheppard Arnold (b. 1941) served as Indiana University School of Law’s twelfth Dean, in 1985. Arnold was born in Texarkana, Texas and educated at the Exeter Academy in New Hampshire. He spent two years at Yale before graduating with a B.S. from the University of Arkansas (1965). He then attended the University of Arkansas Law School where he receive his LL.B. (1968). He received a LL.M. (1969) and a SJD (1971) from the Harvard Law School. Arnold joined the faculty at Indiana in 1971 and remained until 1977, when he accepted a position at the University of Pennsylvania Law School. In 1981 he became a faculty member at the University of Arkansas School of Law, remaining there until 1984. In 1985, Arnold returned to Indiana University to become Dean of the Law School. Soon after arriving at Indiana Arnold was nominated, and ultimately confirmed, to become Judge of the U. S. District Court for the Western District of Arkansas. In 1992 he became a Judge on the United States Court of Appeals for the Eight Circuit and assumed senior status in 2006.

For a complete list of Morris S. Arnold's writings click here. Listed below are writings about Morris Arnold, along with miscellaneous materials related to Arnold.