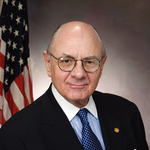 A native of Jasper County, Indiana, Lowell Baier received his B.A. in economics and political science from Valparaiso University in 1961 and his law degree from Indiana University in 1964. While practicing law in Washington, D.C., in 1967, he formed Baier Properties Inc., a Bethesda, Md., based developer of warehouses, residential properties and award-winning office buildings and shopping centers.

In addition to his work as a lawyer and businessman, Baier has been a tireless advocate for natural resources and wildlife conservation. In the early 1970s, he was one of 14 founders of the Wild Sheep Foundation, which has funded over $1 million annually to re-establish the habitat of the four species of wild sheep in North America. He has established similar programs in Russia and Mongolia. Since 1975, Baier has been active in the Boone & Crockett Club, America’s oldest wildlife conservation organization. He took the lead in drafting President George H.W. Bush’s wildlife conservation agenda in 1979 and has led in the formation of Ph.D. programs in natural resources and wildlife conservation management at five universities. From 2004 to 2007, he led a national campaign to raise $6.5 million to purchase for the federal government the last and largest remaining piece of private land (24,550 acres) that was initially Theodore Roosevelt’s Elkhorn Ranch. In 2008, he was named Conservationist of the Year by the National Fish and Wildlife Foundation. In 2010, Outdoor Life magazine selected Baier as the Conservationist of the Year, and the Association of Fish and Wildlife Agencies similarly recognized him in 2013. Additionally, he is a recipient of the law school’s 2007 Distinguished Service Award, and was inducted into the school's Academy of Law Alumni Fellows in 2014.

On March 25, 2015, the Indiana University Maurer School of Law announced a $20 million estate gift from Lowell E. Baier. In recognition of his gift, the law school building will be renamed Baier Hall, and the law library will be renamed the Jerome Hall Law Library in honor of a longtime law school professor who was a mentor to Baier and many other alumni. The gift, which will be distributed annually over a period of years, will be used to enhance the law school’s facilities, including its long-term renovation and expansion. “Lowell Baier’s extraordinary legacy gift provides tremendous support to the school,” said Austen L. Parrish, dean and James H. Rudy Professor of Law. “His generosity will enable us to plan for a learning environment that matches the quality of our students’ academic experience.”

Of his gift, Baier noted, “I am deeply honored by the opportunity to make this gift to the law school. In particular, I am pleased that the library will be renamed in honor of Professor Hall, whose teaching and mentoring were so crucial to my success as a student, and whose wisdom has continued to guide me throughout my career. This gift will ensure the continuing integrity of the law school building and the law library, its very soul, inspiring the best in academic and scholastic achievement -- remember, a sense of place creates a sense of purpose.”