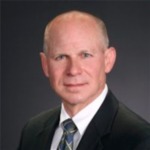 James Richard Brotherson was born in South Bend, Indiana, on February 27, 1952. Brotherson grew up in Elkhart, Indiana, where he graduated from Elkhart High School in 1970. He then attended Duke University in Durham, NC. While at Duke, Brotherson was a member of the varsity swimming team. Although he would also take classes at Indiana University (after what he liked to call his “involuntary academic withdrawal” from Duke), Brotherson ultimately received his B.A. degree in English from Duke in 1974. He then spent a year as a police reporter for the Anderson Herald newspaper, back in Indiana. Brotherson’s time as a reporter, exposed him to the criminal justice system and stimulated him to apply to the Indiana University School of Law in 1975. He received his JD from the law school in 1978.

Fresh out of law school, Brotherson began practicing law in Elkhart with Robert A. Pfaff. Their firm, Pfaff and Brotherson, grew over the years and in 2000 merged with Baker & Daniels, LLP, and ultimately became part of Faegre Baker Daniels, one of the 100th largest law firms in the country. Brotherson’s area of concentration was primarily corporate law, with an emphasis on the rights and obligations of the corporation’s owners. Much of his work was devoted to the recreational vehicle industry.

Active in a variety of non-profits, and serving on multiple boards of civic organizations in the Elkhart area, Brotherson was devoted to his community. In addition, he served the law school as a member of the Alumni Board (1982-1996), Board President in 1994-95, and as a member of the Board of Visitors (1994-95). During the 1996/97 academic year, Brotherson served as the law school’s Assistant Dean for Alumni Affairs and Operations. He was a recipient (2013) of a Maurer School of Law Distinguished Service Award. James Richard Brotherson died in 2015, at the age of 63.

Learn more about James R. Richardson at the following sites: