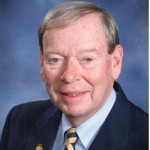 Jeffrey Joseph Kennedy was born in Connersville, Indiana. Raised in Linton, Indiana, Kennedy graduated from Linton Stockton High School in 1960, before enrolling at Indiana University. He received his A. B. in government from Indiana, with high distinction and departmental honors, in 1965. After receiving his undergraduate degree, Kennedy enrolled at Indiana’s law school, receiving his JD degree in 1967. While in law school, Kennedy served as Editor-in-Chief of the Indiana Law Journal (v.42).

After receiving his law degree, Kennedy clerked for Hon. John S. Hastings of the U.S. Court of Appeals for the Seventh Circuit. After the clerkship, Kennedy became an attorney at Kirkland & Ellis in Chicago specializing in antitrust matters. He remained with the firm for the next twenty-nine years.

Always connected to, and supportive of, the law school, Kennedy was the first Chair of the Board of Visitors (1980-81), and later served an additional twelve years as a board member (1975-1987). He has also taught Antitrust courses at the law school. Equally involved in the Oak Brook, Illinois, community, Kennedy has served on the village board of Oak Brook. Jeffrey J. Kennedy was awarded the Indiana University Maurer School of Law Distinguished Service Award in 2017.

Learn more about Jeffrey J. Kennedy at the following sites: