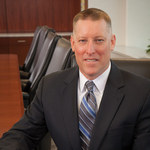 Christopher David Lee was born and raised in Bedford, Indiana. He graduated from that city’s Bedford North Lawrence High School in 1985, before enrolling at DePauw University in Greencastle, Indiana. A member of the DePauw varsity football and track teams, Lee was elected Student Body President during his senior year. He graduated from DePauw with a B. A. in Political Science in 1989. Later that year he enrolled at the Indiana University School of Law. Lee received his JD degree from the law school in 1993.

Chris Lee has spent his entire legal career in Southern Indiana. He rose to become a partner at the Evansville firm of Kahn, Dees, Donovan & Kahn, and is currently partner at Wooden McLaughlin. Lee has a broad based civil litigation practice, frequently managing complex litigation involving multiple attorneys and parties. He is a frequent speaker on trial practice and advocacy issues.

As a member of the Indiana National Guard, Lee was deployed to Bosnia in 2001 and Afghanistan in 2004. While in Afghanistan he founded the Afghanistan Relief Fund, which supports three orphanages, three hospitals, several refute camps, and a school. Lee was awarded the Army Bronze Star for his service in Afghanistan. Lee is a recipient of the Evansville Bar Association's James Bethel Gresham Freedom Award, the Raymond L. White Award for Distinguished Military Service, and is one of the youngest attorneys to have been named an Indiana Super Lawyer. Additionally, Christopher D. Lee received a 2014 Indiana University Maurer School of Law Distinguished Service Award.

Learn more about Chris Lee at the following sites: