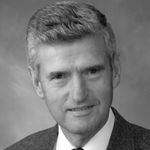 Lindy Glenn Moss was a true Hoosier, who made the decision to attend the Indiana University School of Law when he was 8-years old. Born in Hobart, Indiana, on July 21, 1926, he was a graduate of Hobart High School (1946). After high school, he spent a year in the United States Army Air Corps, before returning to Indiana University where he received the first of his three IU degrees. After receiving his B.A. in business (1949), he received an A.B. in government (1950), and then, at last, enrolled at the IU law school. He received his LL.B. from the law school in 1952.

After law school, Lindy became a FBI Special Agent working on the East Coast. In 1956, Lindy returned to Indiana and began his legal career, serving as Deputy Prosecutor and as a Public Defender for Allen County. His legal career would span almost 50 years, primarily in private practice specializing in business law, tax, and estate planning and administration. Moss was an active supporter of Allen County civic and non-profit organizations, serving on the board of the Parkview Memorial Hospital for almost 30 years. Additionally, he served as president of the Allen County Bar Association.

Learn more about Lindy Moss at the files above and the sites below: