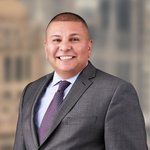 Born and raised in Chicago, Martin Montes is a graduate of that city’s Roberto Clemente High School (1988). He received his undergraduate degree in finance from the University of Illinois at Chicago in 1992 and then enrolled at the Indiana University School of Law. He received his JD from Indiana in 1995.

Montes’ legal career began as an associate with the firm of Barnes and Thornburg. In 1998, he clerked for the Honorable Joan B. Gottschall of the United States District Court of the Northern District of Illinois. He then spent three years as a senior associate with Seyfarth Shaw. From 2002 until 2011, Montes served as Associate General Counsel for the International Legal Division of Wal-Mart Stores, Inc. In 2011, he became Assistant General Counsel-Legal Operations & Administration with Exelon. In 2011, Montes became the Director of Regulatory Affairs with the Chicago-based Commonwealth Edison, and in 2019 became ComEd’s Vice President for Large Customer Services.

A longtime community volunteer, Montes is active in the Hispanic National Bar Association, having served as a regional president and on its corporate advisory board. Through his efforts with the Mexican-American Legal Defense and Educational Fund, he has been active in promoting the civil rights of Latinos in America. Montes also serves as a board member for the Legal Aid Society Legal Prep Charter Academies, and the Hispanic Lawyers Scholarship Fund. Montes served on the law school’s Alumni Board from 2006 through 2007 and the school’s Latino Alumni Advisory Board since 2009. He served as President of the Board in 2017. Montes received an Indiana University Maurer School of Law Distinguished Service Award in 2017.

Learm more about Martin Montes at the following sites: