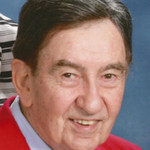 John Weber Donaldson was born (10/13/1926) and raised in Lebanon, Indiana. Donaldson graduated from that city’s Lebanon High School in 1944, where he won multiple academic honors and played on the 1943 Indiana state basketball runnerup team. Upon his high school graduation, he enlisted in the United States Navy. As part of his naval service, he attended DePauw University (1944-45) and the U.S. Naval Academy (1945-47). Upon his honorable discharge in 1949, he spent a summer at the University of Wisconsin and then returned to DePauw. He received his A.B. degree in mathematics and economics from DePauw in 1951. He then enrolled at the Indiana University School of Law, where he received his JD degree in 1954.

After law school, Donaldson returned to Lebanon and opened a practice with Frank E. Hutchinson. In 1956, he was elected to the Indiana General Assembly. Ultimately, Donaldson would serve 17 terms in the legislature, representing the citizens of Boone, Clinton, Hamilton, Hendricks, and Montgomery counties. Among the legislation he was most proud to have worked for were No Fault Divorce and the state’s first No Smoking Bill. Donaldson also served on the Supreme Court Committee on Character and Fitness. At the time of his retirement in 1992, Donaldson had served in more sessions of the assembly than anyone in the history of the state of Indiana, and was the only state representative to serve in five decades in the General Assembly. Donaldson also served as the city attorney of Lebanon from 1967-69, as attorney for the Boone County Planning Commission, and chair of the state Criminal Law Study Commission.

Learn more about John W Donaldson at the following sites: