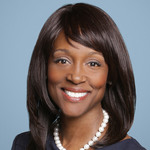 Pamela LeDeyce (Jones) Harbour was born in Queens, New York and raised in the Albany, New York, area. She is a 1997 graduate of Guilderland Central High School. She then enrolled at the Indiana University School of Music, where she received her B. A. degree in voice in 1981. As an undergraduate, Harbour performed in music school opera productions, worked summers performing at Opryland in Nashville, Tennessee, and even performed (2 times) for President Ronald Regan. An injury to her throat, caused by overexertion, made her reconsider her future as a performer. Instead, she decided she would go to law school., enrolling at the Indiana University School of Law in 1981. She received her JD degree from Indiana in 1984.

Harbour spent 11 years working in the office of the New York Attorney General, rising to become Deputy Attorney General of the Public Advocacy Division. After working as an antitrust partner at Kaye Scholer LLP, Harbour was sworn in as a Commissioner of the Federal Trade Commission on August 4, 2003. She left the FTC in 2010, to become a partner at Fulbright & Jaworski and in 2013 became a partner at Baker & Hostetler, specializing in antitrust matters. In October 2014, Harbour became the Senior Vice President, Global Member Compliance & Privacy for the Herbalife, a global nutrition company.

In 2020, Harbour was inducted into the Indiana University Maurer School of Law Academy of Law Alumni Fellows.

To learn more about Pamela Jones Harbour, see the files above and the sites below: