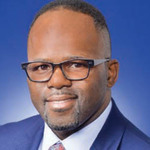 Alonzo Weems (JD 1995) is vice president and deputy general counsel of Eli Lilly and Co., where he oversees Lilly’s corporate legal functions including litigation, human resources, commercial transactions, regulatory and privacy, and serves as general counsel for the company’s global biomedicines business unit. Having spent most of his career with Lilly, he has held several positons within the company including general counsel and corporate secretary for Eli Lilly Canada and director of global workforce diversity among others. In addition to his demanding corporate duties, Alonzo is active in many ways. From 2000-2006, he served as a member of the State Board of Law Examiners, serving as president from 2005-2006. He is past chair of the Indiana State Bar Association's Diversity Committee and serves on the boards of the International School of Indiana and Early Learning Indiana. In 2018 was named by Savoy magazine of one of the most influential Black lawyers in the United States.

Alonzo's service to the school has been long-standing and remarkable. He served on the Alumni Board from 1996-1999; is a founding member of the BLSA Alumni Advisory Board where he served from 2003-2005 and rejoined the board in 2015. And in 2019 he joined the Law School’s Board of Visitors. In addition to his time serving on boards, Alonzo also works closely with our development office in the role of corporate solicitor at Lilly. He is also known as a go-to mentor and advisor to all of our students. Weems is a 1992 graduate of Wabash College

In 2020, Weems was presented the Distinguished Service Award by the Indiana Univesity Maurer School of Law

Learn more about Alonzo Weems at the sites below: