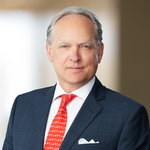 Wojciechowski has spent his professional life in New York, first at Mayer Brown, where he led the firm’s global leveraged finance practice and served on its executive committee, and then as a partner at Allen & Overy, where he served as head of the firm’s North American leveraged finance group. In 2013, Wojciechowski joined Morrison & Foerster where he serves as the chair of the finance and projects group. Chambers USA has recognized him for excellence in the fields of both banking and mergers and acquisitions. Mark is also passionate about pro bono representation, having successfully represented clients on appeal in the area of prisoners’ rights.

As an active alumnus of IU, Wojciechowski is a longtime member of the Board of Visitors, and has hired and mentored many fellow IU alumni.

In 2020, Wojciechowki was inducted in the the law school’s Academy of Law Alumni Fellows.