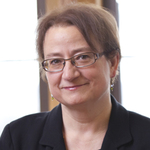 In fall 2013, Robel initiated a strategic planning process aimed at reimagining and invigorating academic programs across the Bloomington campus in anticipation of Indiana University’s Bicentennial in 2020. Robel’s Bicentennial Strategic Plan for Indiana University Bloomington includes ambitious initiatives for the Bloomington campus such as a new School of Art and Design, a new program in engineering, and the integration of health sciences programs into a new on-campus Academic Health Center. The plan also calls for initiatives to promote student and faculty success in a variety of areas, from financial literacy and career development to work-life balance and diversity recruitment.

As the chief academic officer for the Bloomington campus, Robel oversaw the campuswide implementation of the 2011 New Academic Directions report. The recommendations outlined in the report led to the formation of several new schools and programs on the Bloomington campus, including The Media School, the School of Informatics and Computing, the School of Public Health, the School of Global and International Studies, the Integrated Program in the Environment, and the Office of Scholarly Publishing.

Robel’s tenure as provost has seen a number of construction and renovation projects to key buildings on the Bloomington campus, including Hodge Hall of the Kelley School of Business, the East Studio Building of the Jacobs School of Music, the Global and International Studies building, the repurposing of Franklin Hall to house The Media School, and the creation of the Learning Commons and Scholars Commons in the Wells Library. Upcoming projects include expansions for the School of Informatics and Computing and the School of Public and Environmental Affairs, and renovations to Wells Quad and the Indiana Memorial Union.

Robel has worked to solidify IU Bloomington’s reputation as a renowned international partner for collaborative research and academic initiatives, as well as a preferred destination for undergraduate and graduate students from around the globe. In recent years, Robel has traveled to Brazil, Chile, South Korea, and Taiwan to explore new partnerships and reaffirm existing partnerships with leading universities in those nations.

Robel received her J.D. from the Maurer School of Law in 1983 and her B.A. from Auburn University in 1978. Her scholarly work focuses on the role of federal courts and addresses issues such as procedural reform and sovereign immunity. Her articles have appeared in numerous leading law journals. She is a frequent speaker on topics ranging from procedural reform to sovereign immunity and co-author of Federal Courts: Cases and Materials on Judicial Federalism and the Lawyering Process (LEXISNEXIS 2005), a casebook on federal jurisdiction written with Arthur Hellman. Robel has also been a visiting faculty member at Université Panthéon-Assas (Paris II), where she published a book, Les États des Noirs: Fédéralisme et question raciale aux États-unis, (Presses Universitaires de France, 2000), with Professor Elisabeth Zoller, a frequent visitor to the Law School.

Laure K. Robel was inducted into the Indiana University Maurer School of Law Academy of Law Alumni Fellows in 2015.

Learn more about Lauren K. Robel at the following site: