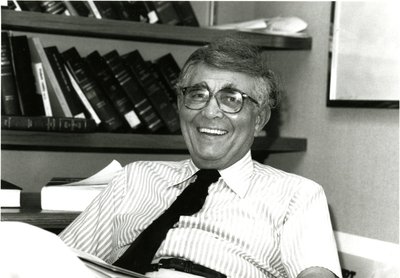 At this year's annual Alumni Weekend, colleagues, family, friends, and former students of the inimitable Professor Harry Pratter, who died in March 2002, gathered to share their recollections of his life and career.

Pratter, who was born in the Ukraine and emigrated to the United States as a child, began teaching at the Law School in 1950, after earning his JD from the University of Chicago. He taught many different subjects, including Commercial Law, Negotiable Instruments, Conflicts of Law, Contracts, Torts, and Family Law. But more fundamentally, "he taught life," according to Professor Fred Aman, longtime dean of the school.

"For Harry," says Aman, "there was no such thing as just a legal problem. There were only human problems with which the law must deal." The following remembrances were presented by Pratter's former students.