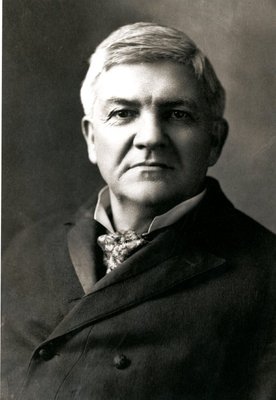 George Louis Reinhard (b. 1843; d 1906) became the third Dean of the Indiana University School of Law in 1902. Born in Bavaria, Reinhard immigrated to the United States when he was fourteen. After serving in the Union army during the Civil War he attended Miami (Ohio) University for two years (1866-68) and then relocated to Kentucky where he was admitted to the bar. In 1871 he moved to Rockport, Indiana where he began practicing law. He served as Prosecutor of the Second Judicial District from 1876-1880. He was elected circuit judge in 1882 and reelected in 1888. When the appellate court was organized in 1891 he was appointed judge, and reelected to that position in 1892. Judge Reinhard became a Professor of Law at Indiana University in 1896. In 1897 he received his LL.D. from Miami University and in 1899 Indiana University conferred upon him the A.M. Degree. For much of the period of his deanship, he also served as Vice President of the University (1903-1906).