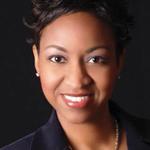 Born in our nation’s capital, Laurie N. Robinson Haden graduated from Oxon Hill High School (Prince George’s County, Maryland) in 1990. She then enrolled at North Carolina Central University, where she received her B.A. degree in political science in 1994. In 1995, she enrolled at the Indiana University School of Law and received her JD degree in 1998. While in law school she served as an Associate (1996-97) and then Executive Notes Editor (1997-98) on the Indiana Journal of Global Legal Studies.

Haden’s legal career began as an Associate at the New York offices of Epstein Becker & Green (1998-2000). She then spent two years at Seyfarth Shaw, specializing in labor and employment issues, before being hired by the CBS Corporation as the Assistant General Counsel and Director of Training and Development. She was promoted to Vice President and Assistant General Counsel in 2002 and Senior Vice President and Assistant General Counsel in 2009. In 2015, she was tapped by CBS for a new role within the Litigation Department reporting to the Head of Litigation. In this position, she oversees and manages outside counsel, directs legal strategy, and participates in alternative dispute resolution.

In addition to her work at CBS, Haden is founder (2004) and CEO of Corporate Counsel Women of Color, a non-profit professional organization which advances women of color attorneys and fosters diversity in the legal profession. Haden has been recognizes by numerous organizations for her work and public service efforts, including a 2010 Indiana University Maurer School of Law Distinguished Service Award.

Learn more about Laurie Robinson Haden at the following sites: