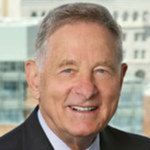 A graduate of the Indiana University School of Law (Maurer), Birch Bayh served 18 years as a United States Senator from Indiana. Among his many accomplishments was authoring two constitutional amendments: the Twenty-fifth Amendment on Presidential and Vice Presidential succession, and the Twenty-sixth Amendment that lowered the voting age from 21 to 18 years of age. Additionally, Bayh was the author of the landmark Title IX legislation, to the Higher Education Act, that mandates equal opportunities for women students and faculty. Learn more about Bayh, HERE.